Captain Dave McCabe, Marge McCabe, Debbie Hughes and Bob Hughes participated in the Houston Disability Awareness Month Kickoff and the 25th Anniversary of the Americans with Disabilities Act, hosted by the Mayor’s Office for People with Disabilities. Held at the Reflection Pool at City Hall, participants had the opportunity to tour the Disability Rights Museum on Wheels, sponsored by the U. S. Business Leadership Network.

Sailing Angels received the 2015 CARE Award for “Outstanding Organization”, presented by Jay Stiteley with the City of Houston, Department of Neighborhoods, Mayor’s Office for People with Disabilities.

Debbie works for AIG where she is president of the Employee Resource Group for Disabilities and Allies. She rallied a team from AIG to host a booth and facilitate the event as directed by the organizers.  The festivities were opened with a cake-cutting ceremony followed by an address and the presentation of a City proclamation by Mayor Annise Parker.  The program included the presentation of the 2015 CARE Awards and lively music by the Air Force Band of the West. The event also featured informational booths and adaptive sports demonstrations. Read more about the event here and view the video:

Mayor with SA Board Members

Air Force band of the West 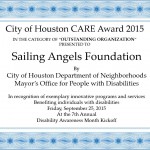